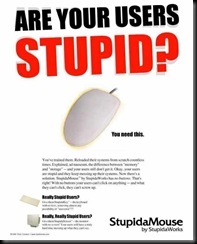 I just can’t stand it anymore. My head is going to asplode…

I just had a tech support call from two individuals (secretaries) who told me that when they were updating their files the other person wouldn’t see the change.

My first thought was that one had a local copy and one had a network copy. Or that one was working with an email attachment and making changes to it. I could *almost* forgive either of those as being accidentally stupid. I’ve seen people save a local copy for changes, and then in the future open it from the recent files list rather than the original location, so they accidentally have the wrong version.

Nope it wasn’t that. The two secretaries share a departmental folder. I assured “Mary” that if they were saving the changes that the changes were saved. If “Abby” didn’t see them, then was something else going on in the process and that they weren’t working on the same file.

She told me that they were. I opened it. Made a change. Saved it. Opened it on the other computer, and the change was there. See? Works every time. I wonder why it didn’t work for us. I’m not sure. Why don’t you show me what you are doing. Ok.

As soon as Abby goes to open the file I have to bite my tongue before exploding. THEY AREN’T THE SAME FILE YOU ~!@#~@#!$!. Abby and Mary each made a folder under the common “Office” departmental folder. One was called ‘Abbys Files’ and one was called ‘Marys Files’. They each had a copy of the file in question within their own directory. And each would open up their own copy and make changes. When the other one didn’t have them, they would call the other one and have the changes reentered.

I also discovered their brilliant process for taking meeting notes. Open the Excel file. Delete all the information from the previous week. Save it (over the same name erasing everything previously). Print a copy. Open Word. Open Last week’s file. Retype the minutes for individual ‘sections’ (roughly 30 of them). Print it. Clear the document. Type the next section. Print it. Clear the document. Repeat 28 times.

Now they have the end result they wanted. Printed copies of each weeks notes in summary and broken down on individual pages stored in the appropriate physical folder. If they ever need to refer back to any meeting, they have to go and find the single physical copy that was printed out. Heaven forbid it’s ever lost or damaged.

I can’t handle it.