…everyone gives to their mistakes. –Oscar Wilde

So the Bachen Family went on an adventure tonight. Actually, several. I’ve been looking for an excuse to try out Chore Wars, and finally decided to do it tonight. Chore Wars is an online game which allows you to earn experience and treasure for your character by doing chores. Make work fun!As I explained to Jean, it’s like gold stars for gaming geeks. 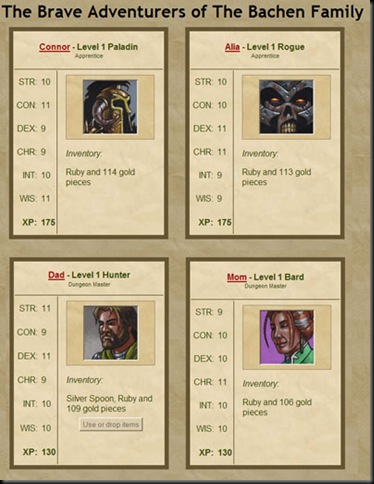 It was a raging success! Both kids completed the adventure ‘Telling Mom and Dad about School” (15xp), and “Eating All my Lunch” (25xp). Alia’s lunch quest was uneventful, while Connor had to fight off a hungry dog. They each earned some gold coins and a golden tiger.

Alia ate all of her dinner, and completed the adventure ‘Eating All my Dinner – NonCombat”. (50xp) She earned some more gold coins and silver spoon. She traded in her silver spoon for dessert, and got some yummy vanilla pudding.

Connor didn’t want to eat his dinner tonight, but he kept wanting to go on another adventure.

We told him no. You only get to go on an adventure and fight the bad guys if you eat your dinner like Alia did. He pouted for about 10 minutes, and then decided he really wanted to try it again. So he ate his dinner! Then we went on his adventure and completed “Eating all my dinner – Combat” (50xp). This time the Monster Dog was no match for his swift sword. He vanquished the monster and found some gold coins and silver spoon – which he promptly turned in for some Jello.

Oh, and everyone in the family completed the special adventure “Trying Something New with My Family”. We each earned 100 XP, and got a ruby! Who knows what you can turn THAT in for. Its so special you can only carry 1 at a time!

I’m not sure how we’re going to create the rest of the quests. For now, to get them involved, I made sure they were able to complete 1 immediately (lunch, which I knew they ate), 1 that required little effort (tell me about school), and 1 which took effort (eating dinner).

I made sure that they earned a treasure for dinner, by setting it to 100%. We really want them to eat dinner, and it’s the biggest fight in terms of meals. Tentatively, 1 silver spoon = dessert. Maybe you can save up for 3 and get ice cream at the mall, or have mom make a cake! Who knows.

I created two quests for meals, with (100% chance) and without (0%) combat.. That way I can ask them ahead of time, do they want to fight or not.. it doesn’t really matter as you can’t die, but it lets them have a choice.

I’ll work on the other quests later.. “Being nice to your brother/sister” and “Picking up toys”.

Plus, I have to add the adult chores.. I think taking out the trash is worth at least 30XP!

For now, I was just happy to see that a little bribery for dinner worked. Let’s hope it sticks with him, and I can get them thinking about doing things to earn xp and treasure.. obviously I’ll have to tone down the treasure at that point, but I gotta hook them in first! Rules of being a DM – make the first fight easy.