So it’s been nearly a week since we returned from Pennsic. Overall, I’d say that we had a very good time. Definitely the best of the last 3 with the twins.

What made this war unique was the fact that the East lost during the opening ceremonies as HRM Konrad conceded the war.

I highly encourage you to listen to the interview provided by the Pennsic Independent Podcast. In fact, you can listen to it directly from that page.

This will give you his reasons behind the decision; one that I support 110%. Unfortunately, I don’t think the king of the Mid really understood the point and missed the boat.. He was going to fight the war the same way they always have, and put it down as a 37-0 win in their books.

That’s a real shame. Although in Konrad’s interview he discusses at least one point where they attempted to force balance the sides, it wasn’t the standard.

I feel for Lutr. I understand that the Midrealm has been on the receiving end of being outnumbered in the past. But that doesn’t mean it needs to continue every year. Konrad stepped forward and took full responsibility for trying to make the war fun and competitive and not just a bloodbath. But old wounds heal slowly, and this was an opportunity lost by the Midrealm to make things better for the future wars.

So I’m disappointed that he chose not to force balance the sides, and was instead more concerned with the win. Even if force balancing was discussed as a convention, it wasn’t practiced. The response was that since the war was over (the East conceded) there wasn’t any reason to follow the conventions. That’s crap.

Even worse was the presentation to our rapier army that made it seem like it was our side that graciously allowed them to take the field with a greater number. Sure, he gave all of our units an award, but I can’t help but feel that both the speech and the award were just for show, and to make them feel better about the choice they made not to even the sides.

I will say that there was some confusion in our ranks and in my mind when I was at the woods battle that day. We numbered 113 and they numbered 200. So the initial thought was that they had 82 more people than us (or roughly 73% more), and they would have to give up 40 people to even the sides. In fact, during Lutr’s speech to us he mentioned only 20 of his heavy crossovers needing to “sit” in order to even the sides, and I remember thinking (as well as hearing other people saying later), ‘Well you’re still shorting us another 20 people’.

Later though, on the car ride home with my wife, we did the math. Since the conventions stated that you couldn’t have more than 25% of your opponent, the actual number of people who would have needed to come over to our side would have been 22 (and closer to Lutr’s quantity). This would make the final sides 135 to 178. 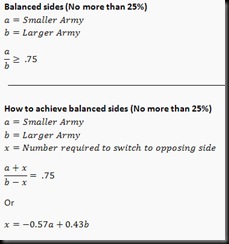 The final equation is rounded for simplicity, but can be used to bring any two sides within 25% of each other.

So then I’m thinking to myself, especially given the time we were delayed in starting, I wonder if the marshals  had a cheat sheet with just such an equation on it, or if they were sitting around in a group going – Ok, give them 15, what’s that? ok try 30.. too many… 17..18..19..20.. ah 22! That’s it. Though with the recent iPhone geekfests I saw at Pennsic, I wouldn’t put it past someone there to figure it out.

I had gotten into quite a discussion just before the Iron Bog court, which was Sunday night and the day of the opening ceremonies, regarding the King’s decision. A few others were disappointed and thought that he had earned himself some Bobo points. I told them absolutely not. Bobo points are given for doing something stupid, and what Konrad did was smart and honorable. Granted I felt this way before reading the excerpt of his interview in the paper or listening to the podcast – both of which later reinforced my beliefs.

Here’s what it came down to. I asked them, as non-combatants, would their way be any different now? Would they still socialize, go to classes and have a good time. Would they still be able to watch the battles and read the articles and cheer on the possible victors? Absolutely. I felt that it was a very rare person who was a non-combatant and was so gung ho about their Kingdom winning, that their war was ruined because of the loss.

So, then, for those of us who were combatants, the stress reduction have having to win was welcomed. I wanted to walk away from the battles, even the ones we lost, with a feeling of ‘good fight. good time.’ and not be muttering under my breath about being outnumbered or having my good time ruined.

Do you know what that’s like? To walk away from the fight so utterly disgusted with the outcome that you wonder why you even bothered to show up in the first place? Why did you take your vacation and spend the time which should be have been enjoyable instead getting beat to a pulp. You question whether you should even bother coming back again to do it in the future.

That’s what Konrad was trying to avoid and why I applaud him for taking the stand. I only wish more people, and especially the royalty of the Midrealm, understood that – and were willing to take the hand that was extended to them.

Build on the mistakes of the past to provide a better future. If that’s not a politician’s get me elected tagline, I don’t know what is. Corny as it sounds, it’s absolutely true.