If you didn’t get it, obviously you’ve never eaten at Dennys. 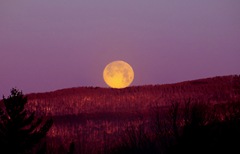 Thanks to Neatorama for reminding me that tomorrow night, the full moon of June 18th, is a solstice moon. Because of the high solstice sun, we get a low, horizon-hugging Moon and a strong Moon Illusion.

The Solstice Moon Illusion is described here by NASA. It’s an effect known as the Ponzo Illusion, but there is still some debate on how that’s possible when it’s experienced by pilots without foreground objects.