Here’s hoping that the new ARG that I am following is going to pan out to be a really good one. 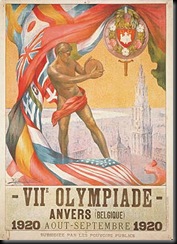 I’ve been disappointed in the last several I have joined/lurked on. For whatever reason, they’ve fallen apart or didn’t meet my expectations of puzzles/interaction. This is often the case when they are grassroots ones run by inexperienced puppet masters, or when they are limited in their involvement tool and are more marketing based.

There have been several bits of information regarding this one that indicate that it may have some serious ARG designers behind it. If that’s the case, then it’s less likely to fizzle and *hopefully* will have the involvement level I’m looking for. Not going to post them just yet in case they are incorrect, but it’s a start.

One of the most inspiring tidbits though is that the theme of the ARG is the Olympics. If it’s truly a professionally done product tying into such a well known product, it’s going to need the proper level of support. It appears to be tied to the 1920 Olympics. Speculation abounds regarding a stolen flag, a 6th colored ring, protests, the works….

If all goes well, today should be the day that more information is revealed. People received boxes last week to draw us into the rabbit hole, and the initial date appears to be 3/3. So I’m anxiously monitoring the website and the unfiction forum for more information. Another indicator that this is being done large scale is the individuals who received the packages have various ties to the ARG community, but more importantly there are also ties to major media outlets and things. Your common grassroots projects don’t send out information like that which gets you covered on big sites likes CNet.

If you think that you might want to follow this ARG, whether it’s your first time or you know about ilovebees and others, here’s some informative links:

Article on CNet with some beginning coverage

[Trailhead] Find the Lost Ring (unfiction forum thread covering the initial rabbithole packages, who’s received them, what they include, and rampant specualation)

Find the Lost Ring (the website revealed in the rabbit hold packages.. as of this post, nothing is on it but an error message.. hopefully more will be revealed today)

2 Replies to “Find the Lost Ring”