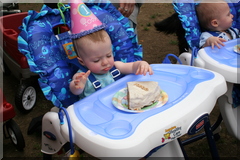 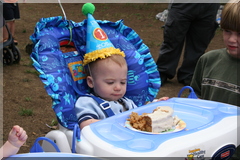 Last week we had the twins 1st birthday party! Their actual birthday is July 13th, but we figured it was better to have a rip-roaring party on a weekend than the middle of the week.

Do you like the stupid hats they are wearing? Jean and I were at Party City picking up supplies and the exchange went something like this:

Now, things could be worse. Can you believe they actually have a category called “Stupid Hats”?

We need to have a stupid hat party and invite all our friends. I’m stealing that idea from my dad, but being reminded about it because of my kids. Those that know my father, know that he’s a big fan of Jagermeister. Many years ago, Jaggy had an ad campaign which featured people making that scrunched up face you make when you take your first shot. Something about how ‘smooth’ it was. My dad had a hat party, and they all took Jagermeister pictures of them making faces and wearing stupid hats. I wonder if I can track down those pictures somewhere.

Oh, so back to the party. It was really cool. Luckily we have the fortune of knowing people with tents and popups. The Brooks’ pavillion was a big hit. It provided shade and a nice place to hang out. I managed to avoid either a) setting it up or b) taking it down. Talk about timing! The first time I was off buying ice (do you *know* how much ice you need for a party of 60+ people???) and the second time was..um.. I forget.. but I wasn’t there and I had a reason. I felt bad (of course), but what could I do? Mentally I just added their setup and breakdown time to the twins’ present. I mean, jeez – if I added it my moving debt or airport pickup debt, I’d really be in trouble. I’ve managed to offset some of my moving debt by working on their basement, but I know the scales are still tipped in their direction.

Lots of good food, and not too many leftovers.

We also had some T-Shirt Fencing on the side of the house, now it’s not naked fencing

but it still keeps you on your toes. I’m surprised more people didn’t actually fence, as that’s been the ‘thing to do’ at the last several parties. Guess the die hards weren’t there.. or forget their gear, or whatever..

Well that’s a long enough entry for now. I’ve got more to talk about, but not time to actually type it up.

[Listening to: Celebrity – Barenaked Ladies – Everything to Everybody]