Just a reminder to all Bobos, dues can be paid annually at any time. This really shouldn’t be a problem for you, even with the economic times as bad as they are. I am fully confident in our ability to be stupid, no matter how much money is involved.

In case you’re wondering, I renewed my membership today.

So I’m outside working in the garden and hear some buzzing above the table we have setup for the kids to eat snacks and also where I had their towels (they were playing in the pool).

I looked up and saw a huge wasp’s nest in the holly tree directly above the table. So first I move the table and then I worry about the kids playing out there, so I go into Dad protector mode. I don’t actually see any movement and it’s later in the day, so I decide I’ll just chop off the branch its on and get rid of the whole thing. 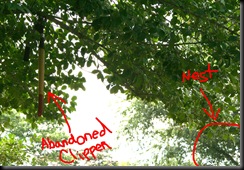 The tree limb cutter didn’t cut all the way through on the first try. So the branch kinda worbled and woke up the whole hive. Apparently it wasn’t as late in the day as it should be.

So the buggers chased me across the yard and stung me three times… I was yelling like a girl, as the situation warranted. As you  can see by my picture, the clippers are still hanging in the tree branch that they failed to cut.

When I got done whacking the ones on my shoulder and taking my shirt off, Alia asked me what happened. I said I was stung by a wasp. A: What’s a wasp? Me: It’s kinda like a bee.

A: Oh, a bumblebee. You must smell like a flower.

So I called Jean, told her the whole story. Told her to buy some wasp spray. When she got home, I looked at the stuff – “Hot Shot”, “With a 27 foot stream”.

I unloaded 1/2 of the can on the damn thing, and then another 1/4 from the other direction (once things settled down).

Now I have to wait 24 hours to take it away, as the wasps who weren’t there will come back to the nest and get their comeuppance.