If you’re going to raise geek children, it’s a good thing to have geek friends.

Saturday was the twins 3rd birthday party. The first present opened was an Imaginext  Pirate Ship by Fisher-Price 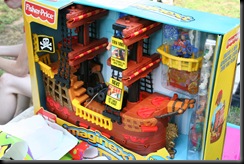 It has ZOMBIE Pirates.

I mean, come on.. how much geekier can you get than that? I’m sure it was easy for Mike and Sam to actually pick this item out, because, truth be told, Mike is a 3 year old himself. He was as excited about playing with it as they were.

Connor took one look at it, opened one of the accessory packs (a skeletal shark) and decided he didn’t want to open any more presents. He had the one he wanted. 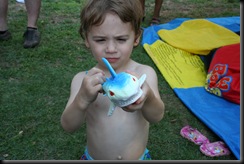 The ship has ‘action points’ on it, allowing for things like raising the anchor, or firing the cannons. You put the pirate in the appropriate place and turn it, and then the magic happens. Very cool indeed.

He played with it all night Saturday, and all day Sunday (except for the time when Alia had the captain and they were fighting over it). I’m sure, even as I write this, he has his ‘Captain Hook’ fighting against the zombie pirates.

Last night, Alia wouldn’t eat her meatballs. But, when the two-headed dragon chariot decided to eat the ‘dragon food’, she was right behind him. Finished the whole plate. That didn’t give the dragon the strength needed to survive the onslaught of the zombie pirates though.. At this point, whatever toy Connor is holding is the one that wins. 🙂

I soon got mauled by two children snarling and growling at me, pretending to be the dragon. No sympathy from the wife, who sat there chuckling that I brought it on myself.

I did, of course, and that makes it all the better.

5 Replies to “We’re going to need a bigger boat”