There is only one gas station in National Park, NJ I mean, we’re a tiny little place, so it’s understandable. It’s not of those 24 hour mega-stations with a market or a restaurant attached. You have to plan to get gas during normal business hours, or you wind up heading out of your way to hit the Lukoil over by 295 which caters to the highway drivers. 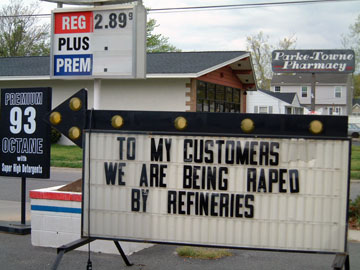 So for the past few months, they’ve had this sign in front of the station. The owner is letting all the patrons know that the increasing gas prices aren’t just him trying to screw us. He’s having just as difficult a time trying to run a business. No one seems to buy anything other than Regular grade anymore, so he doesn’t even waste the time putting the prices up. That sign could just as easily have the first and third lines rewritten and cover alot of the folks throughout the entire petroleum industry that are having their way with us. How’s this one sound “To all citizens, we are being raped by our government and big oil”?

One Reply to “Local Gas Station”