From my ‘to be commented on’ articles: 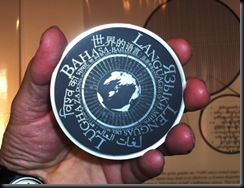 “Kevin Kelly has an interesting post about an archive designed with an estimated lifespan of 2,000 -10,000 years to serve future generations as a modern Rosetta Stone. The Rosetta disk contains analog ‘human-readable’ scans of scripts, text, and diagrams using nickel deposited on an etched silicon disk and includes 15,000 microetched pages of language documentation in 1,500 different languages, including versions of Genesis 1-3, a universal list of the words common for each language, and pronunciation guides. Produced by the Long Now Foundation, the plan is to replicate the disk promiscuously and distribute them around the world in nondescript locations so at least one will survive their 2,000-year lifespan. ‘This is one of the most fascinating objects on earth,’ says Oliver Wilke. ‘If we found one of these things 2,000 years ago, with all the languages of the time, it would be among our most priceless artifacts. I feel a high responsibility for preserving it for future generations.'”

How freaking cool is that? The modern Rosetta stone has unlocked so many secrets of ancient civilizations through the language barrier, its amazing to believe that future generations will have it so much easier. Click the link on the excerpt or follow this link for the full article.

On a related note, I just finished listening to Axis, book 2 of the Spin Trilogy by Robert Charles Wilson, and I highly recommend both books (the second sequel, Vortex, is not yet published).

Spin details Earth’s response to an artificial membrane placed around the planet which selectively blocks and filters incoming electromagnetic radiation, blocking out the view of anything beyond minimal low Earth orbit. The novel is told in first person, from the viewpoint of Tyler Dupree. Tyler is a close childhood friend of Jason and Diane Lawton, twins of E. D. Lawton (a wealthy industrialist who makes his money from the developing aerostat business). As children, Jason, Diane, and Tyler witness the dramatic arrival of the “Spin”, as the phenomenon comes to be known, when the stars suddenly disappear one night as they are looking at the sky. Initial experiments show that the membrane is permeable, allowing space probes to pass through, but that time outside passes at a highly accelerated rate, 3.17 years per Earth second, or roughly 100 million years per Earth year. Thus within a generation, the surrounding solar system will age 4 billion years, and Earth will be destroyed by the expanding Sun.

Now can you imagine having a tool such as this digital Rosetta stone after 4 billion years of evolution?