Last night our family sat around and watched old movies. There was some really funny stuff and we saw alot of faces of family and friends who are no longer with us.

One of my favorites was Christmas 1991. My grandmother (on my mom’s side) was still with us, as was my Dad’s twin, Harry. Towards the end of the evening, we all start singing Christmas carols. However, in typical Bachen fashion, we 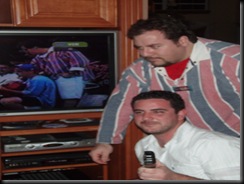 proceeded to make fools of ourselves by making reindeer antlers with our hands and holding red Christmas ornaments in front of our noses as we sung Rudolph. It was a really warm feeling to see our family all together having such a great time.

Later, we watched a family reunion from 1995. At one point it must have gotten colder, so I switched out of my overalls (which earned me the nickname HeeHaw all night) and into a fleece pullover. My sister starting laughing hysterically as she realized that I wore that *very fleece* on the plane ride to Florida. She made me go upstairs and put it on to ‘recreate’ the original shot. My cousin Nick was below me and holding a replica red guitar (Guitar Hero stand-in). It’s a little out of focus, but you get the basic idea. We all laughed for hours. It’s 12 years old and it’s comfortable, so why wouldn’t I wear it? In fact, its starting to tear in the shoulder, in the actual fabric itself, not a seam, so it’s hard to repair. My sister tells me though I should have retired it after 5 years. Obviously I disagree.

Watching videos immediately after an event is fun, but can also be boring. Watching them 10 or 15 years later and laughing and reminiscing is a wonderful experience. I’m glad I was here and part of it. My grandmother enjoyed it too. Sometimes she would argue about who was in a picture or what event it was (and she was always wrong), but other times she was spot on with recognizing who people were. She was especially good at remembering those who had already passed away. The older they were (and obviously the further back in her memory), the better the chance. I know she was glad we all sat around watching them.

One Reply to “It’s Comfortable!!!”